Last weekend, I attended the NFWI’s Annual Meeting in Brighton, and what an experience it was! I’ll report more fully at our meeting on Monday night, but I thought I’d just share some highlights with you here and give you a bit of an idea of what it was like.

We arrived on Friday and stayed at the Hilton Brighton Metropole, right on the seafront. I was one of the lucky ones who wound up with a room with a sea view, looking out toward the dramatic skeleton of the old pier.

Our hotel was full of WI ladies, from Federations all over the country. On our first evening, there was a big buffet meal for all of us in one of the hotel’s big function rooms. It was great because it gave us all a chance to meet and chat with people from WIs outside Cornwall.

On Saturday was the meeting itself.

The lobby of the Brighton Centre was full of all sorts of stalls to explore – ones showing off the WI and Denman College, but also selling WI merchandise, handbags and all sorts of other things. Ladies in yellow hats with buckets were collecting for the Save Denman Appeal as well. I later heard they raised nearly £5,000!

Lunchtime was a lot of fun, with WI members all over the beach eating their sandwiches and dodging seagulls.

We also heard from two very accomplished women: Rona Fairhead, Chair of the BBC Trust and Baroness d’Souza, the current Speaker of the House of Lords.

After such a long day, it was nice to get outside and have a wander around Brighton. We were too late to go to the Pavilion, but we did walk around the outside of it and took some photographs.

Other WI members took to the Pier. 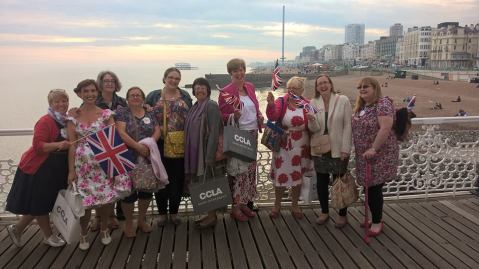 In the evening, after some cocktails in the hotel bar with more than 20 Cornwall WI members, some of us headed out for a lovely dinner together.

This was my first experience at an Annual Meeting and I found the whole thing wonderful. The meeting itself was fascinating, but the best part was the chance to meet and mingle with other WI members. Over the years, I’ve made ‘friends’ with lots of ladies through social media, so meeting some of them in person was a real treat!

As we’re part of a ‘link’ group of four WIs, it won’t be Crowlas & Ludgvan’s turn to send a delegate until 2020. But I highly recommend it so keep it in mind when the time comes!