Informative and Inspirational: Our Resolutions Meeting

Last night’s Resolutions Meeting provided members with a lot to think about as we cast our vote for or against this year’s NFWI resolution.

Our speakers were Dr Gillian Saville, a consultant from the Royal Cornwall Hospital in Truro who deals with transplants; and Joanna Nankervis, a 12-year-old girl from Penzance who received a kidney transplant nearly two years ago. 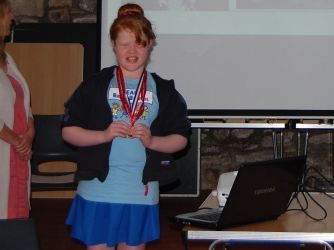 Joanna Nankervis shows off her Transplant Games medal
as she talks to us about her experience
as a kidney transplant recipient.

Little Joanna stole the show. She gave her own Power Point presentation, describing her experiences with dialysis through to her transplant and recovery, and on to her great successes at the Transplant Games. Joanna, who’d like to be an underwater photographer, when she grows up, brought along her proud mum Helen and grandmother Lyn to our meeting. Her story was truly inspiring and the applause we gave her was testament to that.

Gill then gave us the professional’s perspective with facts and figures that were at times staggering. Although 90% of people say they would accept a donated organ if they needed it, the percentage of those who say they are willing to donate is much lower.  We discussed the new system in Wales, whereby people who have neither opted in nor out of organ donation will be assumed to have opted in. Gill talked about the fact that not only does organ donation save lives, it also enhances lives. There is no greater example of an enhanced life than Joanna Nankervis.

Following both speakers’ presentations, we had a lively and engaged discussion and question-and-answer session after which we cast our votes on the NFWI resolution which reads as follows:

The NFWI notes that three people die every day whilst waiting for an organ transplant. We call on every member of the WI to make their wishes regarding organ donation known, and to encourage their families and friends, and members of their local communities to do likewise.

I’m pleased to report that Crowlas and Ludgvan WI voted unanimously to support the resolution. Our vote will be taken by our link delegate to the AGM in Leeds next month.

There’s a great little article about organ donation and the WI on the Western Morning News website which mentions the talk some of us heard at Spring Countdown earlier this year and which quotes CFWI Chairman Kathy Reed. You can read the article here.

If any of you is interested in joining the NHS Organ Donor Register, you can find the link to the website Gill mentioned last night here. As she explained, it allows people to be very specific about which organs they would be willing to donate.

This entry was posted in Uncategorized and tagged monthly meetings, resolutions. Bookmark the permalink.