Last week the Centenary Baton was passed from the Norfolk Federation to the Suffolk West Federation. 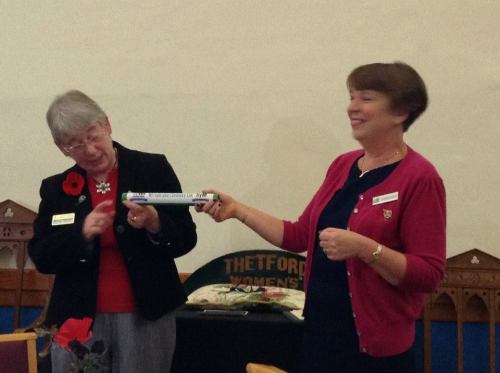 Suffolk West has done it in style, transporting the baton by train and amphibious ‘Duck’, as well as by jeep, Rolls Royce, 1913 Ford Model T, 1953 Morris Minor and motorbike!

It has been taken to coffee mornings, afternoon teas and dinners organised by the 62 (soon-to-be 63) individual WI groups in the local federation, where members have also been encouraged to wear costumes representing the decades that have passed since the national federation was established almost 100 years ago.

On Saturday, the baton spent all day on Bury market and today it went on show at Oddfellows Hall in Whiting Street, before being taken for a photo shoot at Bury Magistrates’ Court, the site of Suffolk West’s first meeting almost 95 years ago.

Cllr Robert Everitt, the Mayor of St Edmundsbury, said: “What a lovely event – for 100 years of WI to be celebrated here in Bury is a wonderful thing. The ladies, as usual, have stepped up to the mark and made their presence felt by getting dressed up in some fantastic costumes, and I am feeling decidedly underdressed.”

Federation chairman Elizabeth Lansman said: “We are a vibrant organisation and I think it’s very important we don’t just look back on our history, but that we make sure we have a good, sound organisation to pass on to future generations.”

She added: “We’re an organisation that does lots of things, but this has brought people together from different WIs who perhaps wouldn’t meet up quite so often.”

This entry was posted in Uncategorized and tagged baton, centenary, Suffolk West. Bookmark the permalink.